MORE THAN A THIRD of postgraduates in Ireland face serious financial problems, according to a new report on their living conditions.

The Eurostudent VI study, the sixth report of its kind on how students experience university life, is due for release today. Over 20,000 students responded to the survey.

The overall average monthly income for all students was â‚¬ 754, while the average living expenses were â‚¬ 832 (of which 42% was provided by someone other than the student, usually a parent or partner) , according to the findings of the report.

Housing was the biggest expense (4% of overall expenses), with an average monthly expense of â‚¬ 365.

More than a third (around 36%) of the total student body reported experiencing serious or very serious financial problems, and the extent to which they experience this appears to be related to their age. Older students were more likely to experience financial difficulties, with 42% of students over 24 saying they did.

For full-time undergraduates and all postgraduates, the distribution of costs is now borne to a lesser extent by the students themselves, who have become more dependent on having these costs borne by their own. parents and partners.

Some 32% of the total student body receive funding from a national non-refundable student source such as a Student Universal Support Ireland scholarship, or money from the Irish Research Council.

Since the previous survey in 2013, the number of students enrolled in higher education has increased by 7.8%. 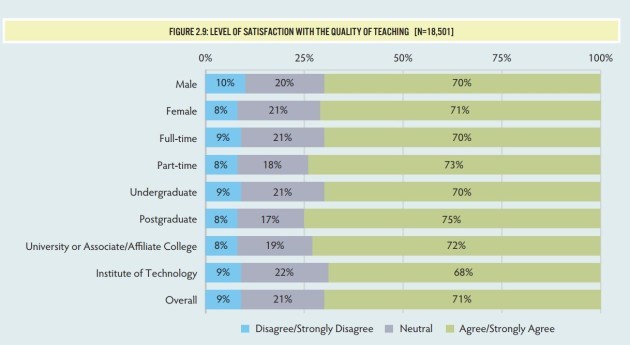 Overall, students reported high levels of satisfaction with the quality of the education they received during their course (around seven out of ten students in each group, as noted above).

While the gender balance at the tertiary level is relatively even, a higher proportion of women has been found in certain fields of study, such as education, service, social sciences, and humanities and the arts. .

Male students, in comparison, were found more in the fields of engineering, manufacturing, construction, math, IT, IT, sports and recreation. Similar proportions of male and female students were found in science and business.

No news is bad news
Support the journal

The survey indicates that 12% of the total student population have children. This is two percentage points more than what was observed in the last Eurostudent report. However, this increase is unevenly distributed among the students.

Of the full-time undergraduate population, only 6% of students have children, compared to 10% in the Eurostudent V study.

Of the part-time undergraduate population 48% have children, while in Eurostudent V this figure was 45%.

The most frequently reported disabilities are mental health problems and learning disabilities. About 8% of students with disabilities consider that their disability severely limits their studies

Minister of State for Higher Education Mary Mitchell O’Connor to launch the Eurostudent VI study during her visit to the Mayo campus of the Galway-Mayo Institute of Technology (GMIT) in Castlebar today ‘ hui.

Commenting on the report, Mitchell O’Connor said: â€œHaving access to high-quality data and hearing from more students about their higher education experience is essential to inform sound policy decisions to ensure we make the right decisions. good things for our cohort of students. ”

Read: Most Irish university graduates are employed in Dublin and Cork

Read: Seven asylum seekers and refugees will receive scholarships to study at UCC